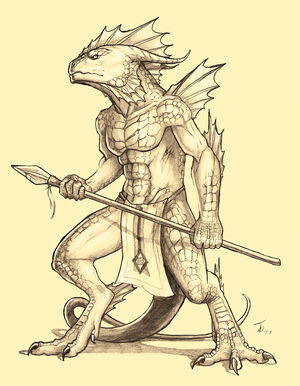 The Doraks are a race of reptile-like humanoids living in Carrick. Their large-sized, robust bodies give them a moderate speed and decent endurance.

The Doraks were created in 1 SC by the Gods of the Fentinnu, after the disaster with the Salvish people. About 80 years later, the other three races inhabiting Ektyaar, modern Heigard, began attacking Dorak settlements to kill Doraks because their population was quickly increasing and therefore they were in the need for more land and resources for them, harming the population of other races.

Although strong, the Doraks were defeated by the other three races and were forced to leave the island to avoid further problems to both groups. They soon would leave Ektyaar into a longlasting flight which took them to Sanaam Desert, where, after a few centuries after their arrival, the Empire of Al-Berib was founded.

The Doraks are known for being one of the most devout people in Carrick. The most of them follow the branch of Valgarism called Naryadism, named in honor of Sultan Naara'yad II, founder of such movement.

Doraks feature a skin fully covered by square-shaped scutes, with leathery protrusions coming out of the sagittal suture area of the head, shoulders, elbows, heels and at the end of the lower jaw; they also possess bone-made horns merged with the skull, placed above the auditive canals. This leathery protrusions (specially the ones on head, elbows and shoulders) can be streightened up, used either in mating dances or to give a tougher appearance. The female Doraks lack the protrutions on head and jaws, and the protrusions in shoulders, as well as horns, are much smaller.

Their usual position seems like if they were partially crouched, standing on their large toes instead of their feet soles. They have three fingers on each foot, with a dewclaw in the inner side of each foot.

Doraks have a long, scaly, pointy tail, which they can control voluntarily. It can measure more than 1 m long.

The rest of their anatomy is very similar to that of Hurs.

Retrieved from "https://carrick.fandom.com/wiki/Dorak?oldid=3885"
Community content is available under CC-BY-SA unless otherwise noted.